Ascii is a character encoding standard adopted by the Institute of Electrical and Electronics Engineers (IEEE) in 1963. Ascii (pronounced ask-ee) is an abbreviation for American Standard Code for Information Interchange. The Internet Assigned Numbers Authority (IANA) refers to the standard as US-Ascii, to denote that it is based on characters and symbols used in the US, and was developed there.

This is a method of representing text characters in a binary representation recognized by computers, communications equipment, and other technological devices.

Computers are binary devices, with each character of data represented by a series of ‘bits’ that make up a character. It is the arrangement of these bits that formulate a character that computers understand, as illustrated in a standard ascii code table.

By utilizing a standard set of characters as ascii offers, a computer can easily exchange data with other computers or ascii-compatible devices.

Ascii utilizes a structure of 7 bits to represent 128 characters and symbols as a numeric value. Referring to this ascii chart as an example, it becomes easily visible that the ascii value 65 represents an upper-case ‘A’, ascii 54 represents the number ‘6’, and so on. 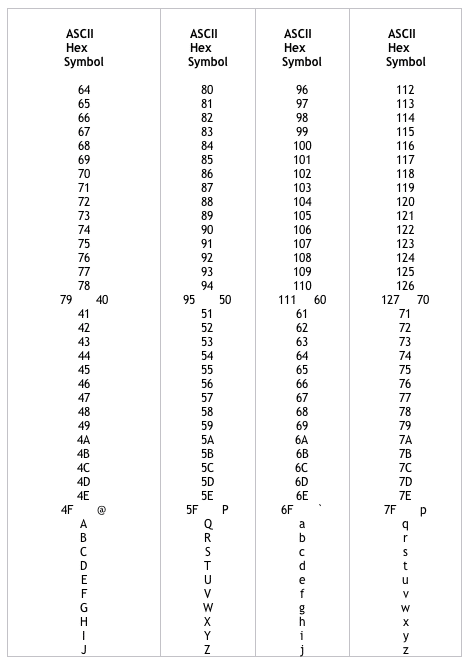 Human-recognizable characters are included, such as 63 for the question mark, while other values represent machine functions, such as ascii 13 representing CR (carriage return – pressing the enter key). Other values are recognized by communications devices, computer programs, and operating systems.

Most software systems that communicate between ascii and EBCDIC standards perform the translation from one standard to another seamlessly, without the need for manual steps and even without the knowledge of the computer user.

Translation of hex to decimal values can be a challenging exercise when done manually. Fortunately, there are hex to decimal calculators available for general use online. To perform the operation manually requires an understanding of hexadecimal values.

Moving on from Ascii

While many of today’s personal and business computers support the ascii standard, the world wide web obviously cannot support every language and character within the limitations of ascii. Unicode has now evolved as the standard that handles an amazing 139,000+ characters, including the ever-popular emoji characters. Even Unicode is a growing standard, as symbols and characters are added continuously.

Hiring? Job Hunting? Post a JOB or your RESUME on our JOB BOARD >>

Subscribe to our newsletter for more free interview questions.