What Is A Quicksort Algorithm?

The Quicksort algorithm is a useful way to sort through data, available in a number of languages, such as C++ and Java. For many coders, quicksort is indispensable, and almost every programming forum cites quicksort as one of the most efficient sorting algorithms available.

But what exactly is the Quicksort algorithm and how does it work? 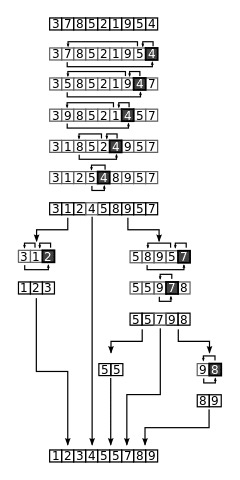 Quicksort is relatively simple, but a user needs to understand two key concepts in order to comprehend the algorithm as a while. The first concept is recursion, which is used in nearly all dynamic programming languages. Simply, recursion allows a computer program to perform the same task over and over again with different elements or variables.

For example, in JavaScript (which is a dynamic language), the computer program can check to see if an array element is higher or lower than five (for example). Then the computer program can be set to recursively check each element in the array (which is essentially a list), and report whether that array element is smaller or larger than five. This technique is more useful than having the user type every item in the array and sorting through them that way. As usual, Geeks for Geeks has a thorough explanation of quicksort.

What happens though, if the list is large, containing hundreds and hundreds of entries? Even with recursion, the process will take too long if the computer program can only check one number at a time. That is where the “divide-and-conquer” strategy comes into play. When divide-and-conquer is used by a sorting algorithm, one array element is chosen as a “pivot”. This pivot is then used to break the array up into multiple sections, otherwise known as partitions. Once these partitions are created, then the computer program begins using recursion on each section of the program simultaneously.

An Example of Divide-and-Conquer

An example of this concept in action is as follows:

While knowing the concepts behind quicksort is useful, it doesn’t explain why we should use Quicksort in the first place, considering other algorithms, such as mergesort, appear to be just as effective on paper.

What makes quicksort so useful is that the constant factor represented by the O factor actually is quite good, generally enabling quicksort to match or even be faster than mergesort for real world applications, if the coder is careful in ensuring the optimal conditions for quicksort to operate with optimal efficiency.

If the partitions are of unequal size, the speed advantage inherent to quicksort is lost and the logarithm may be even slower than a stable sort such as mergesort. Careful coding is necessary to preserve quicksort’s speed advantage.

For almost any type of sorting that doesn’t need to be stable, Quicksort probably would be the first and strongest choice of the veteran programmer. What is stable sorting? Well, that’s another question and one that should be answered if the user is to truly understand the capabilities of Quicksort.

A stable sort essentially tries to keep the order of the original list to be sorted when possible. For example, let’s just say a stable sort algorithm, such as Mergesort, had the following array elements to sort alphabetically by first letter:

A stable sort algorithm would return the following result:

In other words, the algorithm would respect the original order of the entries “stable” and “space” and not alter the order. This is an example of a stable algorithm.

Meanwhile an unstable sort may or may not respect the original order, so the return could either be:

or it could be:

Please note that neither return is incorrect. If what the programmer requested was to create an alphabetical list by the first letter of the word, both returns are legitimate. However, if the user needs to respect the original order of the array or list when appropriate, then this feature of Quicksort could be seen as a drawback.

But suppose you need a sorting algorithm that is more stable than classic quicksort, but still retains quicksort’s speed? Well, that’s fairly simple. The quicksort algorithm can be coded to exhibit the same traits as a stable sort algorithm. While this solution does require some skill in coding, the rewards are obvious. When the stability of a stable sort and the memory use and speed of Quicksort are combined, the results can undeniably be effective.

With careful planning and proper coding, quicksort is an undeniably effective sorting algorithm for C++ and Java users. Considering its relative ease of coding and hefty speed advantage, there should be no question as to why quicksort is so popular. As long as the coder understands that the algorithm produces unstable sorts and the partitions must be roughly equivalent, quicksort is a powerful tool. Every coder in need of a sorting algorithm should try it today.

Filed under: Programming by Joe Clark
No Comments »